Anyone who has had a sports-related injury will admit to having experienced some psychological difficulty, along with the physical consequences of the actual injury. It is quite common for injured athletes to start feeling irritable, anxious, isolated, and depressed. However, psychological stress can also be a factor in the occurrence of sports injuries.
Sport and exercise participants who experience extreme life stress are more likely to be injured. In addition to this, we have seen that psychological phenomena such as motivation and ambition play important roles in injury rehabilitation processes.

What is a ‘sports injury’?

The term ‘injury’, in this context, refers to physical trauma to the body that causes temporary, sometimes permanent, disability and impaired motor function.

More than 25 million people in the United States are hurt each year in sport, exercise, and recreational settings (Williams & Andersen, 2007). Data from Sweden has shown that as much as 75% of elite football players will suffer an injury at some point during a season (Luthje et.al., 1996). We take it as a given that injury in sport and extreme exercise is inevitable, but the psychological consequences of the injury need to be addressed to provide adequate support to injured sportsmen and women.

Why and how does injury happen?

Physical, social, psychological and personality factors all influence injury, while stress also has a central role to play. Physical factors can include muscle imbalances, overtraining, physical fatigue and high-speed collisions. Social factors refer to the perception that, in certain societies, continuing to play sports with pain and injury is highly valued; a show of commitment and strength. This is something that continues to happen in the female sporting arena, with women athletes ignoring any pain caused to them by injury and continuing to play through it (Liston et.al. 2006).

Slogans such as “Go hard or go home” and “No pain, no gain” typically push the athlete to accept injuries, play through the hurt, or take needless risks. In the last two decades, sociological research has looked into sports norms, values, and environments that are related to an injury. The “macho” and gendered beliefs about playing with pain increases risk injury, as does value external forms of success (e.g. prize money) over intrinsic achievement. In some cases, athletes who play with injury and pain are also more valued by their teammates.

Research on the interaction between sporting injuries and personality is still in the pipeline, but from what we know so far, personality factors such as optimism, hardiness, self-esteem and trait anxiety seem to play an influential role in the stress-injury relationship. For example, an athlete characterized by high trait anxiety may be more prone to injury than someone with low trait anxiety (Ford et.al. 2000).

The role of stress in sports injury

In terms of psychological factors as the cause of injury, many theories centre on stress. A stressful athletic situation like competition and demanding training can increase the chance of injury, depending on the athlete’s coping strategies, or simply put, how threatening he or she perceives the situation. When we feel a situation is threatening, our anxiety levels increase, which leads to a variety of changes in focus and muscle tension, contributing to a higher chance of injury.

Athletes who develop psychological skills such as goal setting and relaxation techniques can handle stress better, reducing both the chance of getting injured and the actual stress that comes with the injury should it occur. Furthermore, we can go so far as to suggest that stress is not related only to physical injury, but can also affect physical illnesses that result from the combination of intense physical training and psychosocial variables (Petrie & Perna, 2004). This might explain why some athletes develop infections, have a poor adaptation to training, or express varied physical complaints when they feel stressed.

With stress levels being the main antecedents of sports injuries we can conclude that athletes with higher levels of life stress – which can include losing a loved one, moving to a new home, or financial problems – have more injuries. Coaches and sports psychologists should be on the lookout for these at-risk individuals. In terms of rehabilitating from an injury, the greatest source of stress is not the actual physical injury, rather the psychological reactions to it. This can be the fear of getting injured again, feelings of hopelessness, lack of attention, and sometimes even thoughts about giving up altogether on their sporting career. 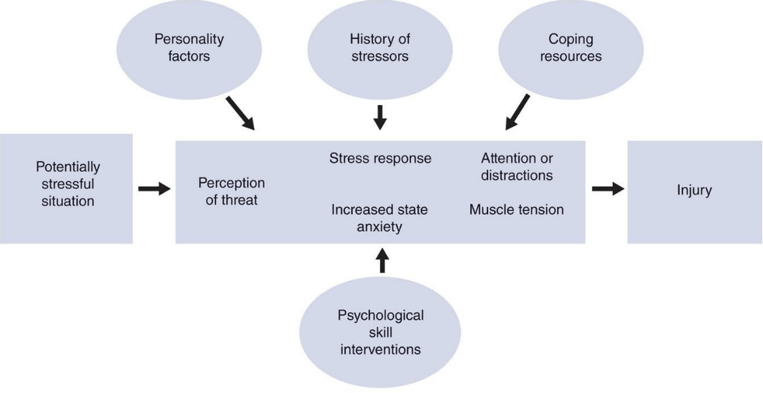 Athletes who have been injured often follow a five-stage grief response process: denial, anger, bargaining, depression, and acceptance and reorganisation (Hardy & Crace, 1990). These stages do not necessarily occur in the same order, and one can go back and forth between them. Some other psychological reactions to injury may include identity loss, fear and anxiety, lack of confidence, performance decrements, and the group processes within the sports team.

Even with the assumption that most people will have a typical reaction to injury, the speed and ease of recovery can still vary widely. Many advancements have been made in recent years in the rehabilitation of sports injuries, such as the employment of more active recoveries, less invasive surgeries, and weight training. Additional psychological interventions are being tested in the transition to returning to the sport from injury. Different types of motivation have been studied, showing intrinsic motivation as the key tool for returning to the sporting arena. Intrinsic motivation is generally linked to a greater appreciation for the sport, improved mental toughness and higher motivation for success.

Other equally important skills and strategies that can speed up the rehabilitation process are building rapport with the injured individual; taking in their perspective, providing emotional support, being realistic and positive, educating them about the nature of the injury and the recovery process, teaching psychological coping mechanisms, preparing the athlete to cope with possible future setbacks, and encouraging sufficient social support.

Teaching stress management techniques is becoming imperative for improved athletic performance, while at the same time reducing the risk of injury and illness. Athletes and exercise fanatics must learn to differentiate between normal discomfort that accompanies overload and increased training volumes, versus the pain that comes with the onset of an injury. Thus, when dealing with an injured athlete, both physical and psychological aspects of injury rehabilitation must be carefully considered.

The Psychology of the Injured Athlete was last modified: July 19th, 2019 by MIUC