The MIUC Students’ Debate Club discussed the topic of European migration policies. The question in this debate was: “Should EU countries accept more refugees?” As with other debates discussion followed the Oxford model of debating, with one three-member team responding affirmatively to the question and the other three negating it.
The positions in ‘affirmative’ and ‘negative’ teams were assigned to students by lot, a few weeks before the debate. Students from the ‘affirmative’ team pointed at EU states’ obligations stemming from ratification of the Refugee Convention, pursuant to which governments are to continue receiving refugees in their territories and act “in a true spirit of international co-operation in order that these refugees may find asylum and the possibility of resettlement”.

The debaters deliberated over the impact of the increased migration in the context of EU economies and labour markets. The team rejecting the idea of more refugees in Europe spoke about economic crisis and high unemployment levels many EU countries have to handle, migration notwithstanding. Their opponents argued in favour of the benefits migration offers for economic and labour markets, i.e. increased economic competitiveness and supply of qualified labour force: doctors, engineers, teachers. 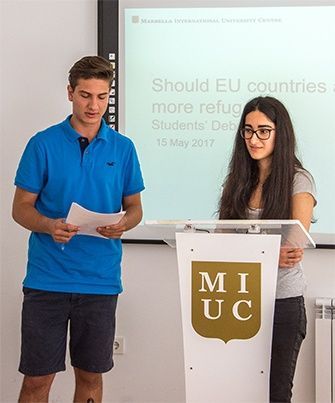 While the team opposing the acceptance of more refugees in Europe voiced concerns over security issues and “clash of civilisations,” the team arguing for more refugees to be accepted by EU countries spoke about the importance of integration and refugees’ commitment to building a better life in countries of asylum.

Furthermore, the proponents of EU policies leading to acceptance of more refugees in Europe raised the problem of an ageing European population, arguing that integration of migrants will help solve problems of working-age population decreases.

The team responding affirmatively to the question “Should EU states accept more refugees?” won the debate. In determining the winning team the jury took into consideration the quality of arguments raised and research undertaken by the debaters as well as their team’s capacity to follow the Oxford debating model.

It was the last debate of the MIUC Students’ Debate Club this academic year. We will resume our debates again in October!