Considerations on the history of political economy and the need for its renewal in the digital age.

In the 19th Century (the 1800s), thinkers of all persuasions picked up on increasing references to a concept that states and societies were bound together by a “political economy”. The concept was attractive because it seemed to offer a means by which the organisation of societies over the past centuries could be analysed and subsequent efforts at governing for the general welfare could be improved. A sign of its attractiveness was the fact that thinkers of all sides of the political debates of the time (monarchist traditionalists, liberal progressivists, left-wing socialists and free-market capitalists) were all drawn to discussing the issues they were examining with the rubric of “political economy”.

Physiocrat thinkers in France discussed the wealth of the nation as emanating from the land and the rents therein. The English and Dutch mercantilist thinkers believed wealth to be primarily represented in the zero sum game of nations for resource acquisition, which would often be symbolised by the growth of gold or other precious metals reserves. Adam Smith´s contribution as a key free market thinker, as well as Jean-Baptiste Say´s further emphasis on free markets and liberal economic systems were another take on political economy, albeit not yet openly named as such. 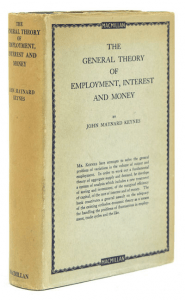 Successors to Smith in England had significant debates relating to the organisation of economies on a national scale- two names in particular dominated the discussion. On one hand was Thomas Malthus, a traditionalist who believed that the economy should be strictly controlled by government interests and planning, especially from a demographic and long-term strategic perspective. On the other hand stood David Ricardo who focussed on government instead submitting itself to the needs and interests of national economies in order to foster what was later termed the “competitive advantage”.

Political economy became a normalised term to refer to the manner in which social, political and economic issues could be considered. There was an effort made to more clearly distill the core principles of preceding political and economic theories into a more manageable and coherent whole: a  political economic theory. Of course, the most famous of these distillations is that of Karl Marx who, beginning in the 1850s and culminating in his Das Kapital (1863) (in)famously bridged English economic thinking, French utopian socialist and anarchist ideas and German analytical rigour into an analysis and, in fact, an entire system, for criticising the existing political-economic realities. That book, in particular, spawned several generations of political leaders who would seek to impose a new order based on what they understood to be the remedial measures against capitalism´s impacts – a system surpassing capitalism. 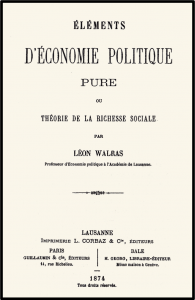 Yet there were several others discussing political economy during these decades, including the more famous Jeremy Betham, John Stuart Mill and Alfred Marshall as well as lesser known thinkers such as the Swiss political economist, Leon Walras. Walras was particularly astute in discerning various issues with the “pre-fabricated” concepts and notions often deployed by previous economists and thinkers.

However, by the early decades of the 20th Century, the concept of political economy fell out of favour. Various developments in philosophy, the rise of the new sciences (modern physics, evolutionary biology, geology, environmental sciences, chemistry) and social sciences (political “science”, anthropology, psychology, sociology) had undermined the Enlightenment-era faith in humans’ empirical and rational access to the social and physical world. Instead of individual and mass rationalities and experiences building up the pool of human knowledge (and control) of their social/physical reality – something often referred to as positivism – there was a realisation that our access is much more fractured, and nature/society is much more complex. The complexities and scale of the two World Wars as well as the internationalisation of political-economic relations and surge of new technologies fed into this zeitgeist of the 1910s-1950s.

In response, a new set of chaos-focussed, statistical (stochastic and random), and system-based understanding of both nature and society set in. The new physics and genetics-focussed biology led the way but in international relations and psychology, similar systemic thinking established itself in the 1950s via game theory, systems theory, and behaviourism.

Political economy, by this time, had come under the  influence of the great interwar economist John Maynard Keynes. Keynes, influenced by the Stockholm school of economics and the American institutionalists, suggested that individuals and rational decision-making were not the primary elements of political economy as the classical political economists had assumed. Instead, the broader systemic processes and chaotic conditions (including the famous “animal spirits” of humans that were irrational and non-individual) meant that there needed to be governmental and inter-governmental systems. As he explained:

“The classical conclusions are intended, it must be remembered, to apply to the whole body of labour and do not mean merely… a single individual… We shall argue that there has been a  fundamental  misunderstanding  of  how  in  this  respect  the  economy  in  which  we  live  actually  works” John Maynard Keynes, The General Theory on Unemployment, Interest and Money”.

From the 1950s, political economy disappeared from the  lexicon, especially as behavioural, psychological, statistical (econometric) and other disciplines influenced the modern economics profession and dogmas. The political aspect of economics began to be thrown out of the equation. 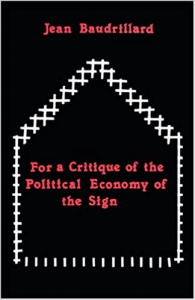 A few voices spoke against this- especially the so-called “post-modern” philosophers. One in particular, Jean Baudrillard, published an interesting book in 1972 which was intended to reinject the discussion of political economy while acknowledging the fundamental flaws of the classical-positivist expectations. In the book, Baudrillard outlines how the expectations that people participate in rationalistic, calculating and self-interested economic decisions and systems was flawed because of the irrational, influential, and disparate ways in which economies- especially in the modern post-World War 2 era- operated.

Baudrillard went further than simply critiquing the rationalistic calculus. He particularly focussed on the manner in which the very referentiality and mechanisms for relating objects and “goods” in the world that have a physical and rational purpose to their symbolic representation (such as those representations we get of them in adverts) began to be lost as technology overwhelmed individual rationality. These ideas would later be expounded in his most famous book Simulacra and Simulation (1983).

In terms of digital political economy, what is important is that the relevance of Baudrillard’s ideas have only become ever more pressing as the problems of referentiality, rationality, and some of the later concepts that he explored such as hyper-reality and virality, become ever more evident in our 21st Century society. The need for a return to political economic intentions while applying such thinking to an increasingly digital world seems evident in light of these developments.