Despite technology easing much of our day-to-day living, its impact is complex and at times overwhelming.
Along with other daily annoyances (e.g., work deadlines, finance pressures, traffic jams, etc.) the wear-and-tear of everyday demands can strain our mental health. We typically handle mood disturbances through psychological counselling, drug therapy, or both, but increasingly more people are exercising to promote psychological well-being.

Mental health problems, most commonly anxiety disorders and depression, affect one in six Europeans. In other words, around 84 million Europeans suffer from mental health issues, costing EU countries more than 4% of their GDP, which is an estimation of 600 billion EUR annually on healthcare (according to OECD, Health at a glance: Europe 2018 report). Meanwhile, over the past two decades, reviews of literature have repeatedly proven that physical activity enhances feelings of well-being, and decreases the symptoms of anxiety and depression. This is just to mention the psychological benefits, without really touching on the many physical advantages of physical activity.

Respectively, the psychological benefits of exercise can be categorized into several areas: reduction of anxiety and depression, enhancement of mood, improvement in self-concept, and improvement in quality of life. Meanwhile, the term “well-being” refers to several dimensions, such as self-acceptance, positive relations with others, autonomy, personal growth, and a sense of purpose in life.

More specific psychological benefits of exercise, whether it be clinical or nonclinical adult populations, are listed in the figure below: 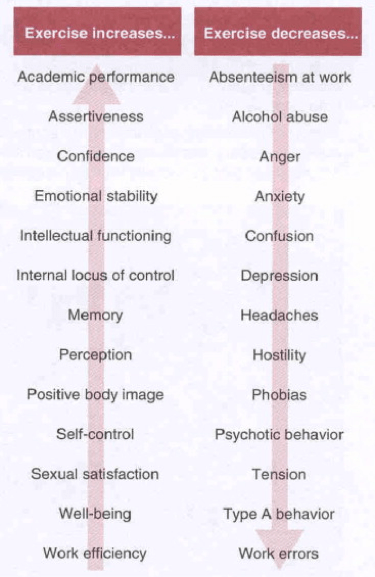 These effects are maximized when exercise is regular (sessions conducted over weeks rather than hours or days), of moderate intensity, 20-30 min in duration, 2-3 times per week, preferably aerobic in nature, and enjoyable.

Reductions in state anxiety and depression after aerobic exercise may be achieved with exercise intensities between 30-70% of maximal heart rate. For anaerobic exercise (e.g., weightlifting), mood-enhancing effects appear evident at a lower range (30-50%) of maximal heart rate (Wipfli et.al. 2008). However, whether aerobic or anaerobic, the baseline of what seems most important is generating continuous rhythmic abdominal breathing.

To explain the mental health benefits of exercise the research proposes several physiological and psychological mechanisms. In terms of psychological explanations, the positive effects of exercise on well- being include the enhanced feeling of control, competency and self-efficacy, positive social interactions, improved self-concept and self-esteem, as well as opportunities for fun and enjoyment.

At the same time, the physiological explanations behind exercise and enhanced well-being are better cerebral blood flow, changes in brain neurotransmitters, increases in maximal oxygen consumption and delivery of oxygen to cerebral tissues, less muscle tension, structural changes in the brain, and the increase in serum concentrations of endocannabinoid receptors.

So it’s no surprise that many exercisers report feeling psychologically, emotionally, and even spiritually better after physical activity. For a while now, a hot topic and another great example on this matter has been the legendary “runner’s high”. The phenomena of runner’s high is “a euphoric sensation, usually unexpected, of heightened well-being, an enhanced appreciation of nature, and the transcendence of time and space” (Sachs, 1984). The feelings can also include a sense of freedom, overcoming pain or discomfort, a lift in the legs, ease, and joy. Among runners who have already experienced this phenomenon, up to 30% experience it on their daily runs, usually occurring after the person has run a considerable length (at least 9-10 km) at a comfortable pace, and being able to “zone out”.

Therefore, we can conclude that exercise can be a useful addition to traditional psychotherapy, but does not replace therapy (especially in patients who have a clinical disorder). Also, exercise should not be used in all cases of depression, stress, or other emotional disorders. However, as a whole, physical interventions have received increased attention since the late 1970s and many physicians and mental health professionals now routinely suggest exercise for mental health benefits and psychological well-being. As such, it must be noted that this relationship between exercise and psychological well-being is correlational, rather than casual.

A Sound Mind in a Sound Body – Exercise and Psychological Well-Being was last modified: October 1st, 2019 by MIUC