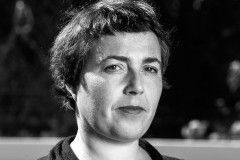 Master of Fine Arts in Spanish Creative Writing.
University of Iowa
Master in teaching of Spanish as a foreign language (Universidad de Alcalá)

Rosario Mérida, a native of Marbella Spain, joined MIUC in 2016. She earned her BA in Sociology at the Universidad Pontificia de Salamanca in Madrid.Following a one-year stay in France, she attended the University of Granada, earning a BA in Translation and Interpretation (French and English) becoming a sworn translator in French. She moved to Belgium in 2002, and began training as a teacher.

She has taught at the University of Iowa,where she obtained both an MFA in Creative Writing and a Graduate Certificate in the Book Arts and Technologies- and at Coe College, Cedar Rapids, Iowa.

Some of her works, including short stories, have been published in Spain and the USA.