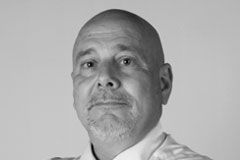 Professor Ruiz obtained a bachelor in civil engineering from McGill University Montréal (Québec, Canada). After graduation, he traveled for three years and found himself in Chicago (Illinois, USA) where he was offered the job of Marketing Manager with Illinois Bell, a former subsidiary of AT&T before the break-up of this latter. Eventually promoted to Illinois Bell´s holding company, Ameritech Services, Professor Ruiz participated in numerous high profile projects such as ISND, which offered telephone service now taken for granted such as three-way calling, call waiting, call-back, etc., as well as Infotext, joint venture with Alcatel that offered the first internet service to the Midwest.

Professor then obtained his Juris Doctor from Chicago-Kent College of Law where he graduated on the Dean's List and as a member of the school´s nationally recognized Trial Advocacy team. After clerking for Judge Warren Wolfson, Professor Ruiz worked as a trial attorney with Clausen Miller, LLP, a Chicago-based international law firm where, in addition to servicing the firm´s clients, he acted as liaison with the firm´s offices in France.

Professor Ruiz later joined Kemper National Insurance Company as lead subrogation attorney. Professor Ruiz was then offered the position of Chief Operating Officer with Talgo, Inc., the North American subsidiary of Talgo, a Spanish manufacturer of high speed passenger rail cars and associated equipment. After three months, he was promoted to Chief Executive Officer where he oversaw the restructuring of the company culminating in the sale of 5 high speed trainsets to the Washington State Department of Transportation and Amtrak, the federal passenger rail service, as well as a 20-year maintenance contract. Together with his team, Professor Ruiz placed Talgo as the preeminent provider of train high technology. Retiring in 2003, Professor Ruiz focused on trading stocks and options.

Professor is passionate about teaching and in his spare time is an avid biker and is learning to play piano.