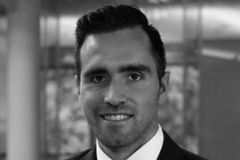 Originally from Seville, Jose has worked all over the world in the United Kingdom, the United States, China and Nigeria before he returned to Spain. Jose Luis Campos is a sports marketer specialized in football and basketball.

He started working in events and advertising in Seville before he took a public relations' job in London. Jose then realized that his passion was in sports and left the UK to pursue a career in his favorite sport, football, in the United States. Jose has spent the last 5 years working in Boston, New Jersey and Portland (Oregon) at the FC Bayern Munich youth academy and Oregon's state association where he has helped to grow the sport of football and futsal.

During his time in the US, Jose specialized in sports management by studying a Master's in Business Administration (MBA) with a specialization in Sports Management at the University of Oregon, the birthplace of Nike. Jose has had several media appearances being an NBA media reporter for the last 3 years and collaborating with several radios and TV to talk about football and basketball.

As a hobby, Jose spent his time coaching football teams. His passion has always been in teaching his love of sports in general and football in particular to his players and from now, his students at MIUC.