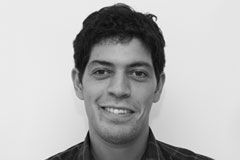 Books:
Syria and Lebanon Under the French Mandate: Cultural Imperialism and the Workings of Empire

Dr. Idir Ouahes obtained his Ph.D. degree in History from the University of Exeter in 2016. Previously, he studied at Exeter (MRes Middle East Studies) and at London’s School of Oriental And African Studies (BA History). He is bilingual in English and French, and researches in Spanish, Arabic and Italian.

As a Graduate Teaching Assistant at Exeter, he taught undergraduates in the politics and history departments. He was also invited to be guest lecturer at the university’s Institute for Arabic and Islamic Studies (IAIS) on the topics of Transjordan and on Europe's post-First World War Middle East mandates. He was nominated for Best Postgraduate Teaching Assistant award by the Exeter Student's Union (June 2016).

Dr. Ouahes is now working on his thesis-to-book manuscript, to be published in mid-2018 by I.B. Tauris as: “Syria and Lebanon at the Outset of the French Mandate: Workings of Cultural Imperialism”. Dr. Ouahes has published, or is in the process of publishing several peer-reviewed articles, book chapters and encyclopaedia entries.

He is an Associate Fellow of the UK Higher Education Authority, and has been a member of the: Society for Historians of American Foreign Relations, American Historical Association, Middle East Studies Association of America, Society for the Study of French History, Royal Society for Asian Affairs, Royal Historical Society, French Colonial History Society.