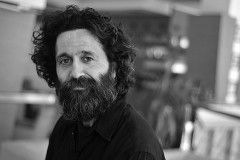 Gil Anidjar is an Associate Professor at Middle Eastern, South Asian, and African Studies Department at the prestigious North American Columbia University. He also participates as a visiting professor at several universities worldwide.

Aside from his outstanding teaching career, he has written and published various books such as “Our Place in al-Andalus: Kabbalah, Philosophy, Literature in Arab Jewish Letters”, “The Jew, the Arab: A History of the Enemy” and “Semites: Race, Religion, Literature” among others.

He edited and published a collection of essays, originally written by Jacques Derrida titled “Acts of Religion" and has also written and published essays for prestigious academic journals. Some of these essays include titles such as “The Idea of an Anthropology of Christianity”, “Muslim Jews” and “Blutgewalt”.

His work strongly focuses on his main areas of interest, which are Jews and Arabs, Political Theology, Race and Religion, Christianity, Rhetorical Exertion and Continental Philosophy.