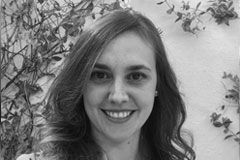 In her PhD thesis, she investigated memory processes and executive function in young and old individuals.

In addition to presenting at several international conferences, she is also the author of a number of publications in both English and Spanish. She has also completed two research stays at St. Andrews University in Scotland and the Max Planck Centre in Leipzig, Germany.

She has participated in various research projects in human memory and bilingualism, working with neuroimaging and psychophysiology techniques as event-related potential and functional magnetic resonance.