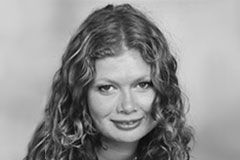 Dr. Alexandra Geller received her degree in Psychiatry from the First Moscow State Medical University following completion of a residency at the world-famous Russian National Center for Mental Health (a unit of the Russian Academy of Science).

In 2008 she completed her German Medical training with a focus on Psychopharmacology, and qualified as a German MD. During her medical studies, she successfully completed training in psychiatry at Basel University´s Psychiatry Clinic in Switzerland and at the Heinrich-Heine-University´s Rhine Psychiatry Clinic in Dusseldorf, Germany. She also graduated from UNED University as a Psychologist. Doctor Geller holds valid medical licenses for Spain, Russia and Germany. She speaks English, Russian, German and Spanish. Alexandra Geller is a board member of the Institute of Applied Psychology (Dusseldorf/Tallinn) and is a board member of a registered charity for migrants in Germany.

Her research focusses on bilinguals, autistic disorder, and on late consequences of ECO.